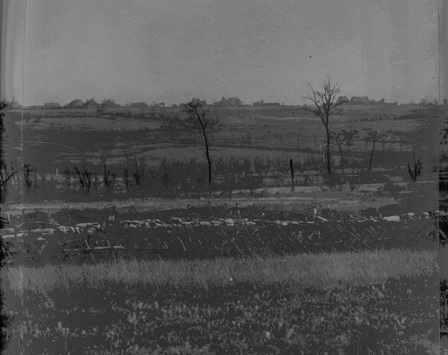 Battlefield in France, During the Great War (WWI)

A Brief Look at World War I

On 4 Aug 1914 an ultimatum placed on Germany by the British to withdraw troops from Belgium expired, plunging all members of the British Commonwealth into war.

Prior to the onset of war, Canada’s army stood at 3,000 soldiers, a number which drastically increased due to voluntary and involuntary enrolment of young men across the country.Conscription is one of the major issues which is still recognized from the war.  As Prime Minister Robert Borden pledged 500,000 soldiers to the British Empire of our young country’s 8 million population.  This issue caused a rift between French and English Canada.  Due to political unpopularity, the conscription of soldiers was not officially applied until 1 Jan 1918.

Despite the problems associated with development of a fighting force, Canadians continued to gainrespect on the battlefields of France. Due to our proud and strong showing in battle, Canada was rewarded post-war with a “modest presence” at the Versailles Conference, and a seat in the newly created League of Nations.

Many brave Port Hopers voluntarily took part in this war, and those which followed, and their valiant effort is continually honoured on Remembrance Day each year on November 11th.
*Source:“World War I,” Canadian Encyclopedia Online, <http://www.thecanadianencyclopedia.com> accessed 13 Oct 2009. 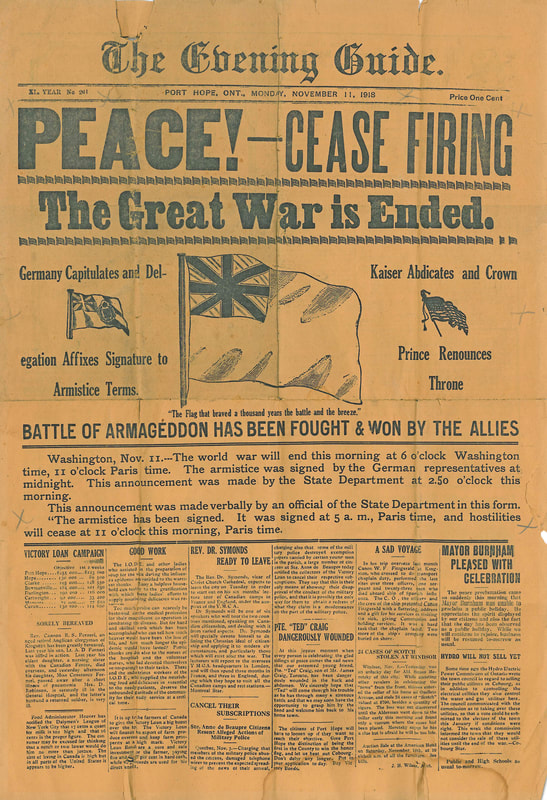 Biography of a WWI Soldier 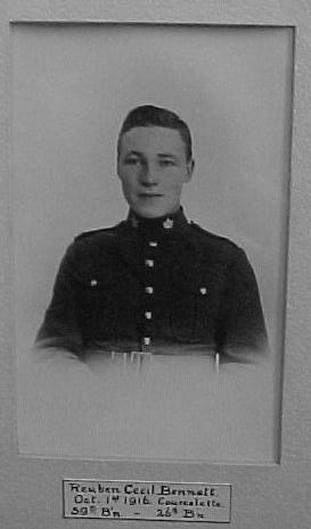 “Bennett was born June 15th, 1895 in Oshawa, Ontario, and was a member of the Church of England.  He belonged to the St. George’s Club and No Surrender L.O.L. 686 Oshawa.  He was a total abstainer all his life and was of a kind and cheerful disposition, making friends wherever he went.  He also took a very active part in all sports, both in Oshawa and Port Hope, and continued the same after going overseas to England and France.

It was stated by his officer that he always displayed great courage, but his greatest trait was that his first and last thoughts were of his home.  Reuben was an exceptional boy in this respect and the greatest possible comfort to his parents.  In his last letters home, he urged his mother to send him her photograph.

At the time of his death, he was in the bombing section of his unit.  A comrade accidentally lighted the fuse of one of his bombs and, throwing away his jacket, Bennett was caught in the explosion and was mortally wounded.  He died at the dressing station and was buried at Albert, France.”

*From the Book of Remembrance reprint p. 25 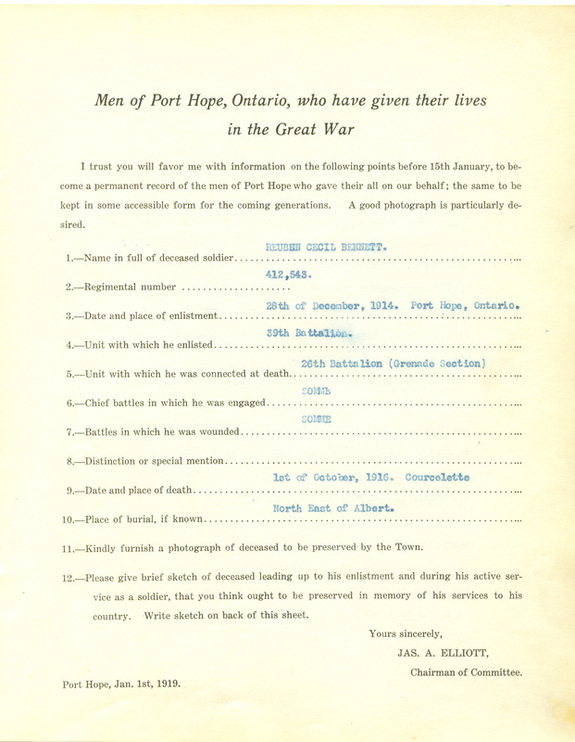 Just a line in answer to your last letter which I received all O.K.  I also received parcel and papers in good order.

No doubt you wonder why you do not receive letters oftener, but we are not always in a place where we can write.  I guess you have seen in the Canadian papers just where we are; it is some place alright.  Our bunch have been in the fray with the rest.  I saw Walter Uglow; he is looking fine.  How is Dad getting along, and the kiddies?

One day I was giving a wounded Fritz a drink, and I asked him when he thought the war would end.  He said he didn’t think it could last much longer.  I hope he is right for I would like to be home to have a good skate this winter.  I have had a few games of baseball since being at the front.  The officer who is in charge of our section catches for me, and we have some good games.  I have no trouble keeping my arm in shape as I am in the bombing section of  the 20th battalion.  The last game we played was against a French-Canadian team.  It was ten innings and the score was 6 to 5 in our favour, so you see we have a little pleasure as well as war.

Have they many in the Durham battalion now?  There is lots of room for them over here.  Tell Dad I haven’t seen his brother since I left England but he is out of hospital and back at the front.  He is in the Oxford and Burke Light Infantry.

Well, I guess I will close your letter as I am writing to Dora, and I will have to save some news for her.  My address now is—Pte. Reuben Bennett, No. 412543, Bombing Section, 26th Battalion, 5th Brigade, 2nd Division, France.

Answer soon.  From your loving son, 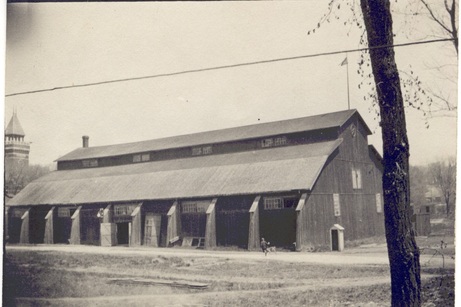 This exhibit highlights the original program for the event, including a detailed “Honour Roll” of the “Port Hopers” who gave their lives to serve their King and Country during the First World War.

Help us honour the memory and sacrifices of those who served our country by identifying the ‘unknown’ people in each photograph, from the Port Hope Archives' photograph collection. Share these photographs with your family and community members, and please send any information to archives@porthope.ca, or call 905-885-1673. 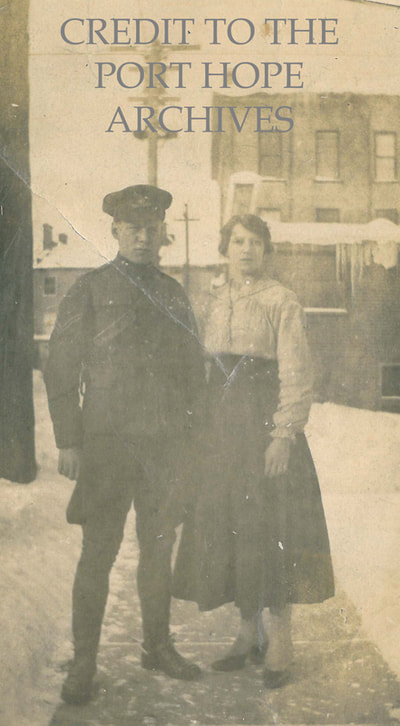 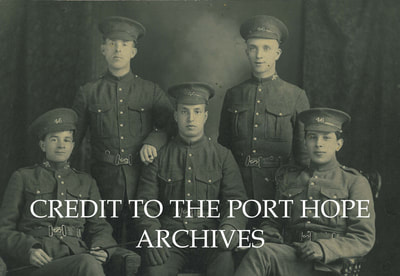 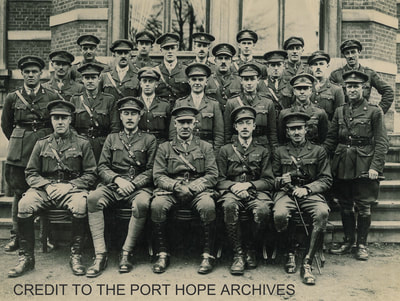 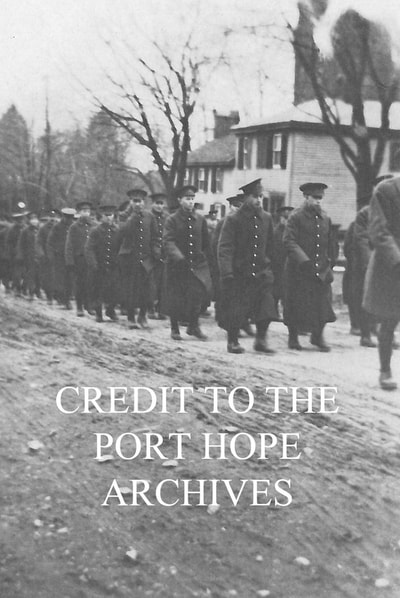 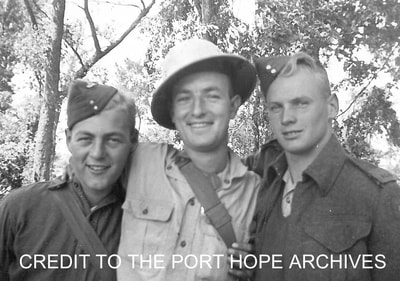 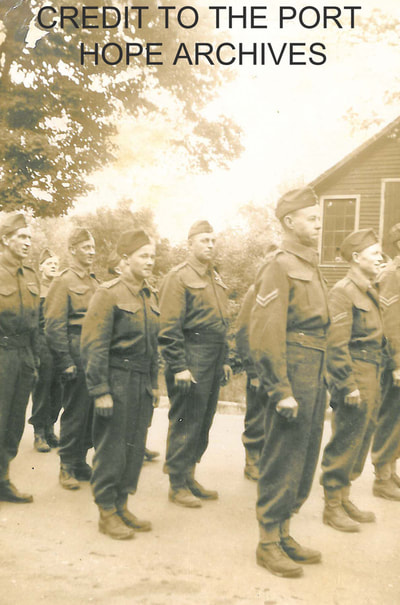 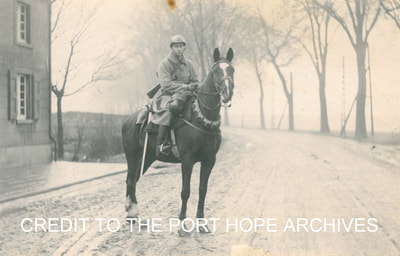 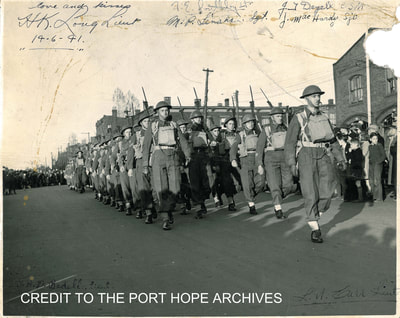 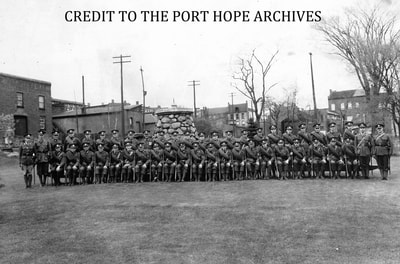 To learn more about Port Hope's contributions to the Canadian Military, please contact us.  You can also have a look at our other military-themed virtual exhibit on W.P. Baulch.

We have two publications which outline the great sacrifices made for our freedom.  The Book of Remembrance and Military Contributions of a Small Town, both of which can be purchased at the archives.