Through the lens of early Port Hope Photography

*This virtual exhibit is an online version of a physical display that was presented on site at the Port Hope Archives from March to June 2016.

Once upon a time sitting for a portrait was an important event; when photographs were romantic and we were not drowning in a sea of unidentified digital snapshots and selfie sticks.  That was the world of early local photographers.

Photography is considered to have originated sometime between 1826 and 1839.  There is disagreement over who is the inventor to be credited: Joseph Niepce (1765-1833), Louis Daguerre (1787-1851), or Henry Fox Talbot (1800-1877).
​
The first photograph is attributed to Joseph Niepce of France in 1826.  Niepce experimented with silver chloride, but eventually looked to bitumen, a slightly more stable chemical, which he used in his first successful attempt at capturing nature photographically.  The result of the experiment was a photograph, entitled "View from the Window at Le Gras."

Panoramic view of Port Hope facing west from King Street, c1880 (PHA# 2004-23-3-451)
In 1839, Louis Daguerre patented the new “Daguerreotype,” a process of using light-sensitive silver on a copper base.  Daguerreotypes are quite fragile due to the use of soft metals in their production; they are often found in small cases lined with coloured velvet.
​
Meanwhile, in jolly old England…

​William Henry Fox Talbot, invented the calotype process. This process involved the first negative to positive reproduction of images.  Talbot’s paper negatives were not nearly as expensive to produce as Daguerre’s silver and they could be used to produce multiple prints as opposed to one unique item.

From the Port Hope Archives' Collection

Local entrepreneurs were quick to set up shop.  Before 1920, There were over 40 early photography businesses in Port Hope! One of these early Port Hope photographers was E.T. Hamly.

Edward Thomas Hamly was born in 1853 to John R. Hamly and Mary Hoidge in Devonshire, England.  As a toddler "E.T." travelled with his family across the Atlantic and arrived in Canada in 1855.  Hamly married Seraphina Harcourt on December 5th 1883.  The pair had two children: Edward John and Lillian.  Edward and Seraphina raised their family in the little house at 24 Ward Street.

During his career, E.T. Hamly worked out of his Queen Street studio, primarily as a portrait-taker, from 1879 to 1917.

“To succeed as professional artists in 18th- and 19th-century Europe and the United States, women still had to navigate gender-specific artistic and social hierarchies.”  (The National Museum of Women in the Arts)

Elisha B. Neal, Port Hope photographer, was no exception to the rule, in fact, she was largely identified by her initials alone to compete with the vast number of her male contemporaries who were also trying to break into the portrait-taking business in the late 19th century.

Because she was born before Confederation, records on the early life of Elisha are difficult to come by, but we do know that she was born in Canada in 1855, worked as a photographer in downtown Port Hope (out of the Quinlan Block on Walton Street) from 1890-1901, and died in 1925. 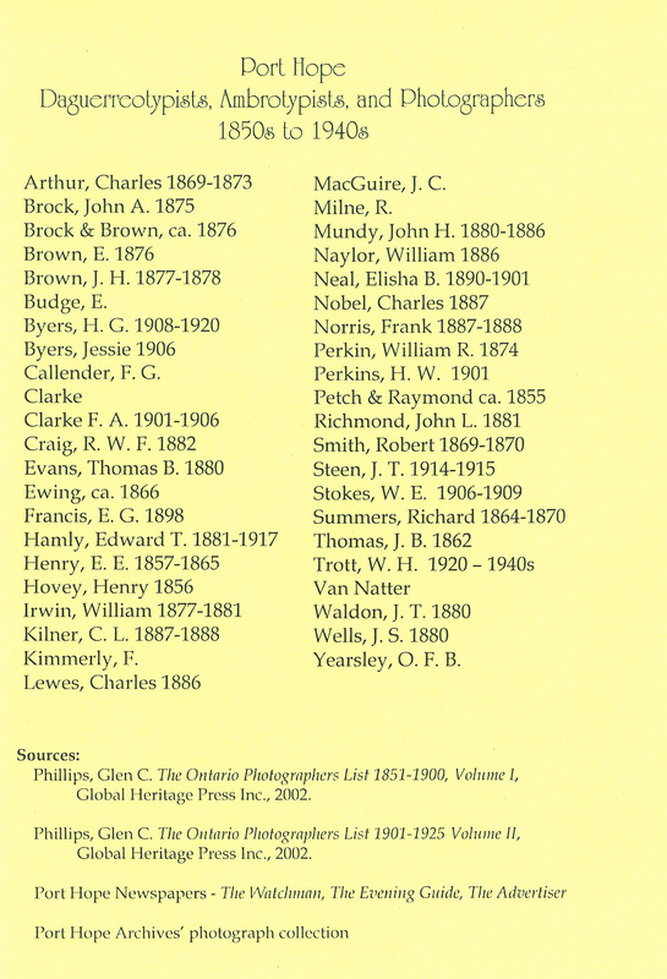 For more information on Port Hope photographers and photographs, contact us!